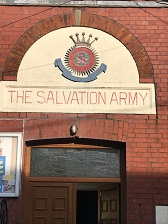 Church halls are notoriously draughty, but not this one at the Salvation Army in Cardiff! Thanks to a new Ferroli Modena HE 32kW combi boiler, the hall’s 16 radiators are efficiently keeping the room nice and toasty.

The new boiler installed by Jason Williams of Willheat, Ferroli’s agent for South Wales, was a replacement for the Ferroli Modena 102 boiler that Jason had installed 18 years ago, which had given great service but was now in need of updating.

“The Salvation Army was very pleased with the performance and reliability of the Modena 102 over the last 18 years and were more than happy to have the new Modena model that I recommended,” said Jason.

“The current Modena is of higher efficiency and comes with a 7 year warranty which was very attractive to them. This allowed them to cancel their annual service contract with a well-known gas supplier and save themselves over £2,000 over seven years. Taking into account the lower gas usage of the new Modena 32c, the saving over this period of time will amount to £1,500, even after the cost of installation.

“The Salvation Army has put their trust in the Ferroli brand because of the performance, reliability, energy efficiency and value for money of their boilers,” said Jason. “There’s no need to pay over the odds for a big brand name when you can get a best buy boiler like the Modena.”

This is Jason’s sixth Modena HE combi boiler installation for the Salvation Army in the South Wales area and his 180th installation of the Modena since it was launched in January 2012.